In order to help visualize the sequencing and nature of the event and the process of my transmission, I will share here the nature of my spiritual awakening and the artistic production that followed, beginning in March of 2008 while I was creating a large-scale art-installation at the Santa Fe Art Institute.  I was looking for the answer to mankind’s next evolutionary step, when I began experiencing a maelstrom of change artistically and spiritually.  Before this art project I had devised a way of drawing on a small scale that involved tapping into my heart, calling forth its energetic sum and delivering that force like sign language on paper using graphite and an eraser which resulted in imagery that surprisingly looked like actual photographs.

Now I was challenged to re-invent my method to get similar results but on a much larger scale.  The solution I discovered was layering graphite-line and erasure in a continuous flowing response to my heart connection inspired by music of JS. Bach.  That process on a large surface manifested a cohesive vision and transmission that was to prove to be the answer to my spiritual questions of mankind’s future.

I seemed to be drawing, what looked like orbs or spheres of separated consciousness in evolving configurations, like constellations in the night sky. Each separate sphere appeared to contain a mysterious drama within its individual borders.  I was at once performer and spectator as these orbs were forged spontaneously through heart-based rhythmic gestures, and then a sculpting process of framing each orb in graphite was afterword required so as to bring the orb’s interiors to life.  This successfully translated the download into definable imagery.   Filling in the spaces between the orbs with solid graphite created a black backdrop that not only formed and rhythmically assembled their configurations, but made them shine like stars. 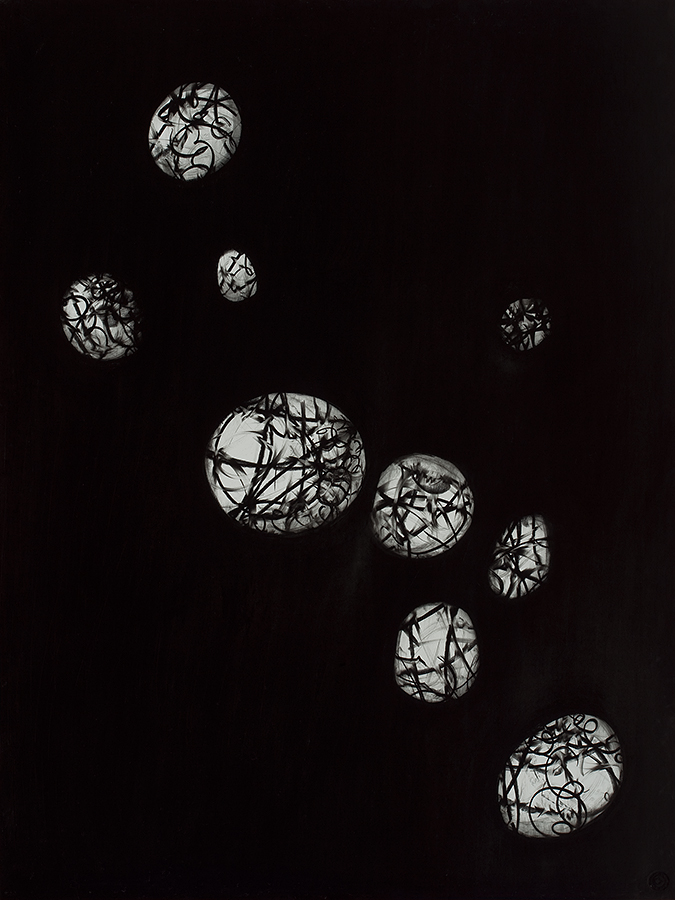 There came a point in this journey of artistic and spiritual discovery on Easter Morning of 2008 when a voice in my soul spoke the words, “if you create 99 drawings you will illustrate the evolution of global consciousness in its entirety”.  Needless to say, I followed those words to the project’s completion, which took a total of eighteen months.

This project was completed in the Fall of 2009 and I am still deciphering the similarities between what came through artistically and the unfolding drama of our planet currently shifting dimensions, I have now come to a visceral understanding that we as humans are primarily individualized aspects of Source energy- preparing, focusing and cultivating our free will in material form- by the guidance of our Souls-  to eventually choose to commit to the cosmic agenda of love and compassion as an assembled focused force.

The Event or Flood of cosmic proportions is where the full current or frequency of cosmic love would draw humanity or this assembled force into a new dimension in a wave of light.

To the uninitiated, this channeled sequence of 100 graphite drawings of orbs and their environment mimic the individual souls that have continuously seeded the surface of the earth.  This sphere or globe houses the gestation of separate beings working their way through the darkness of their conscious evolution.  We are now at such a number as to form a grid of consciousness ready to be birthed into the light of the cosmos.  This sequence is illustrated in my drawings which go through a complete metamorphosis from black to white and can be read in either direction.  I point this out because it resonates with humankind’s descent from Light to darkness or seen today as the evolutionary gestation of our darkness in its return to Light.

As we begin, examining this descent into darkness with the earliest of the orb drawings, they are dense and depicted at close range. As the drawings progress, the orbs or souls’ journeys grow lighter within their individual interiors and increasingly are depicted at mid-range, as they expand to reveal more orbiting configurations as societies are formed.  As the drawings progress towards the end of the sequence, new and smaller shapes appear and far-range constellations are formed with the advent of many new arrivals and larger groupings -as if foretelling of the final stage-the total coverage of the globes embryo of human-consciousness.

There comes a moment, a pause in this continuous expansion which gives way to the inhale of a new cycle of contraction or convergence of separate bodies, as they unify into a seeming whole, resembling a mosaic grid. At this point the individual thought-orbs that were separated by black are gathered as One as they experience the renovating Galactic Wave or foretold Event- and this suspended moment between expansion and convergence, or shall we say – contraction, is the moment of birth- humankind literally being conceived in Love. 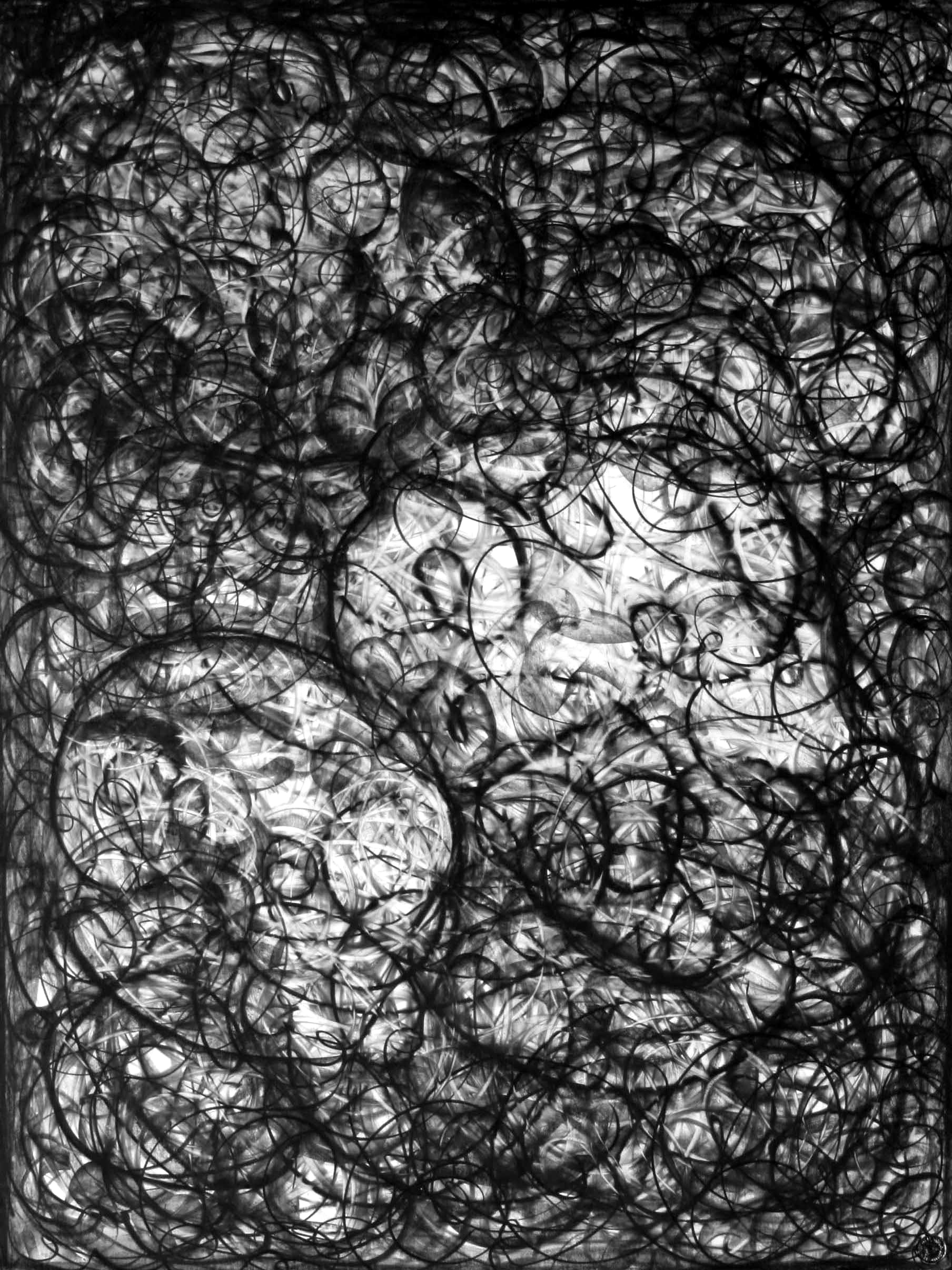 It is from here we see as this moment recedes, the circuitry of human consciousness eventually working its way free of its scaffolding or outer definition.  Now free, the thought-orbs leave behind their mosaic structure with a blossoming of their interiors into a harmonious transcendence beyond separation. Here, what once was the interior of separate spheres now reveal a new unified realm of freedom, unbridled and orchestrated by the inner fulfillment of our unique attunement to our heart, in harmony and concert with all souls. 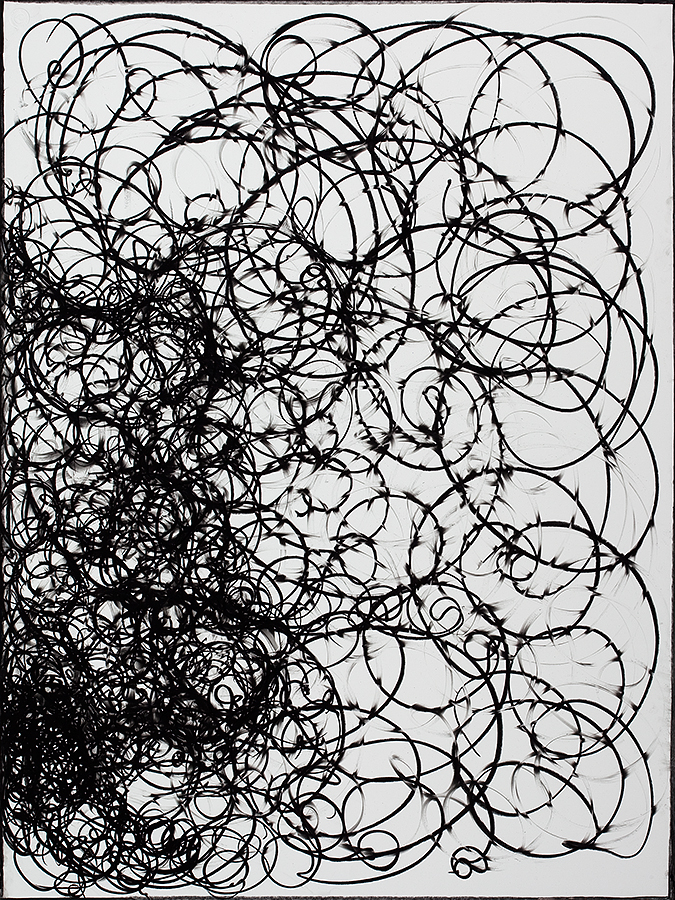 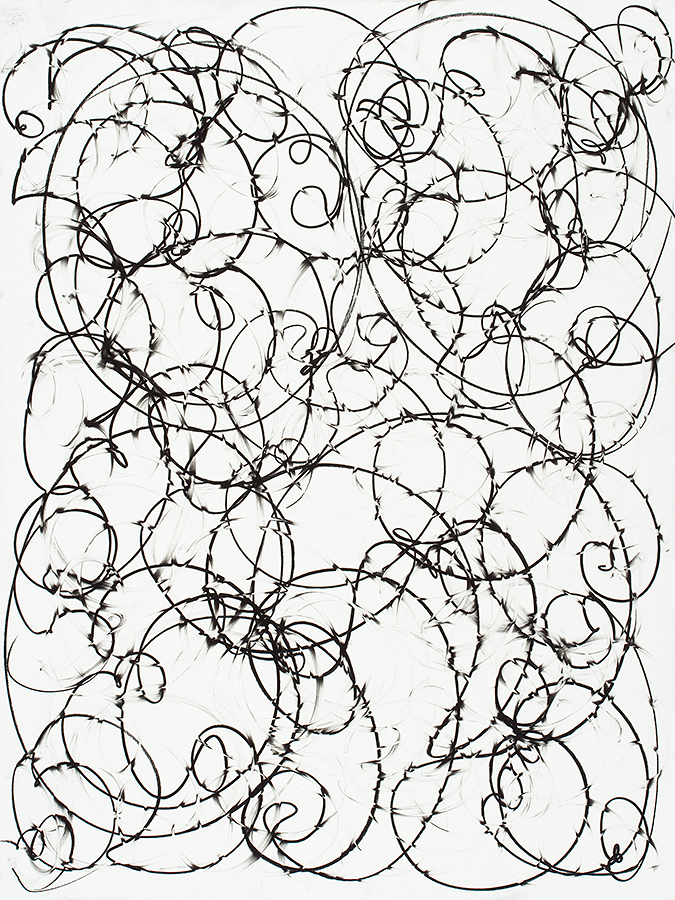 And here, ten years later I am witnessing a grass-roots effort of spiritually awakened forerunners grounding the ramping cosmic frequencies and helping transmute the darkness being purged from the lower dimensions we are feeling within our bodies.  This is all in preparation to help steer the shift in awareness to a global tipping point.  This awakening of our consciousness and DNA to these increasing Source codes are allowing a paced but steady shift from carbon to crystalline-base as we literally are lifted to the frequencies of Love.

The shift happens within each one of us when we choose to say no to fear. Whether before or after a global event.  Ultimately, through the chain of command, we are as aspect of our soul, and our soul is an aspect of Source, making us all one and all The One.  Therefore, we have a choice.  We can block or allow ourselves to receive the flow of support, comfort and guidance from the Source of our hearts or pretend to be disconnected and victimized by fear and doubt.  If we allow ourselves to receive, fear and doubt can stop being self-abuse.

The ascension is a birthing from fear to love and is a choice. The process is as simple as raising our vibration by daily connecting to the Source of our Hearts, practicing forgiveness, being loving and compassionate to ourselves and others and choosing to self-harmonize by allowing ourselves to receive the support, comfort and guidance of Source from within and from our reflection without.

All Drawings in this article are copyrighted by Lory Pollina